No more Mr Nice Guy… That’s the avowed intention of Blackpool boxer RP (Ryan) Davies, who added another victory to his tally with a points win over Edvinas Puplauskas, of Lithuania, on a bill in Rotherham.

Though pleased at the victory, Davies said a personality change – inside the ring, that is – might be the bets way going forward if he is to progress up boxing’s greasy pole.

Super-welterweight Davies said: “I am, and pride myself on being, a nice guy, but maybe it’s time to stop taking my outside the ring persona into it.”

“I am not here to make friends and the lads I am fighting and competing with and all out to finish me.”

“It is time to start incorporating a more ruthless edge in my fights and trust me, its there.”

The fight with Puplauskas proved to be tougher than what Davies might have expected; he described the six rounder as his hardest to date. 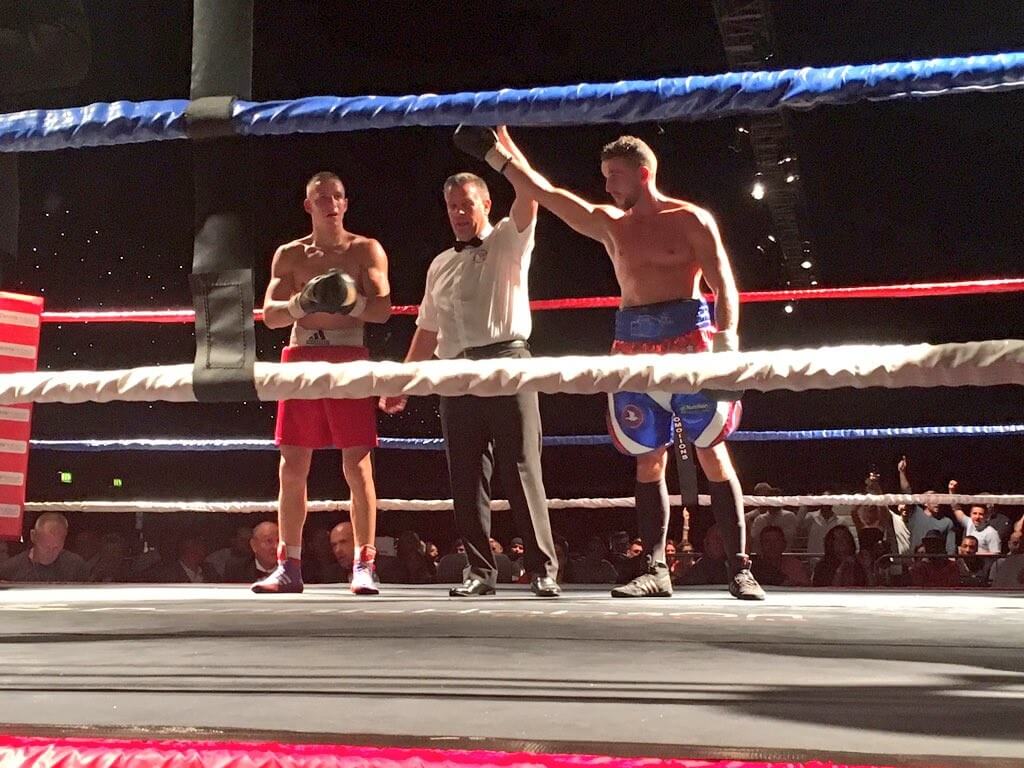 RP Davies (right) has his hand raised after his latest win

Davies said: “What was meant to be a ‘warm up fight’ turned into a six-round war with a very game, hard and big kid who clearly came, not only to win, but to knock me out.”

“This was far from my best performance an it certainly wasn’t pretty but the only thing that matters is the win.”

“I had a couple of dodgy moments on the fight but I thought I did more than enough to get the victory and felt the scorecard was a little harsh as I had it a bit wider than one round.”

Davies added: “I always felt as though was in control for the majority and was outboxing him throughout the rounds, but he was always dangerous with his short, aggressive flurries and I got caught with some punches I shouldn’t have.”

“I was buzzed early on in the first round by a powerful right hand that landed straight on my chin, and I took his best shot! It shows I have a decent chin.”

“I will have a short break and then it is a case of moving up to where I want to be.”