Blackpool boxer RP (Ryan) Davies beat Bolton’s Chris Jenkinson on points at the Midlands Hotel in Manchester and then insisted: “That has laid a few demons!”

The super-welterweight explained: “Jenkinson had defeated William Warburton, who beat me previously – so it has laid some demons for me. It was an important win and now it is onwards and upwards for me.” 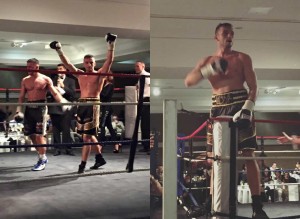 Davies took the victory by 60-54, but he admitted that it was a lot harder than the scorecard would indicate in the all-action six-rounder.

He said: “If I am honest it was closer than that, a bit of a war really and a lot of people there reckoned it was the fight of the night.”

Jenkinson went down in the fourth, but the referee did not take up the count and ticked off Davies for a low blow, which the Blackpool fighter later disputed.

He claimed: “I hit Jenkinson with a left body-shot – I thought it was nearer to his chest than the lower regions.”

“There is talk of me fighting again in December, which I hope will happen because I feel I am on a bit of roll now.”