Davies Boxing Gym has opened on Clifton Trade Park, Brinwell Road, Blackpool and has been a lifelong ambition of the father and son team, who have ploughed a significant amount into the start up of this new venture.

As a former champion on the unlicensed boxing scene and currently in the infancy of his professional boxing career, Ryan Davies trains and works out of the facility, while his father Mark, a former professional footballer and amateur boxer, and now his boxing trainer, does the same. Davies Boxing Gym brings their extensive boxing, fitness and personal training experiences to their own private gym facility.

The gym provides boxing tuition, personal training, private group sessions and various open group classes and aims to provide a positive atmosphere and environment for people to train in, whether that be as an aspiring pugilist, to lose weight or generally keep fit.

The business opened with a soft launch in November, completely transforming the industrial site near the M55 in a matter of weeks and consists of a full size ring, various bags and balls and modern and traditional weights and functional training equipment. The walls are plastered with images of boxing legends past and present, like Evander Holyfield, Floyd Mayweather and Roy Jones Jr, with motivational and inspirational quotes from leading athletes littered amongst them. 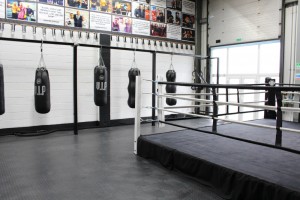 Ryan Davies said, “Opening my own boxing gym has been a dream of mine and when this opportunity presented itself it was simply too good to ignore. I am proud of what we have created and the gym is exactly how I always imagined my own place to look. This venture is something that will benefit me in the short term, by providing me with a first class facility to train out of as I look to progress as a professional boxer, but also in the longer term, as this sport can be a very short career and this allows me to plan for life after boxing.“

Mark Davies added, “We wanted to create a first rate facility for those who wish to learn or develop boxing skills, or just generally train or keep fit, utilising the same facility and techniques as that of a professional boxer in a warm and friendly environment.“

“The initial opening period has been absolutely fantastic, it was always a risk opening our own gym, but we feel we offer something different and the response and feedback we have had has been great! We harbour ambitious growth plans to develop the business further in 2016 and our full class timetable will be released in the coming months. Currently, we are just running a single ‘boxfit’ class from 6 till 7pm Monday to Thursday, where we welcome anyone to come down and try it for themselves!“